Retired community welfare worker Bronwen is the first to admit that she was never very good at going to the doctor, but an itch ‘down there’ forced her to seek treatment and led her to Professor Andreas Obermair. These days, she never misses a check-up.

“When it first appeared, I was looking after my mother who was frail, so I was focused on her health and making memories with her. I tried to treat my itchiness with fungal infection creams and assumed it would just go away. But it got worse. After my mother passed away, I remember thinking, ‘I have to start looking after myself.’ I finally went to see my mother’s doctor.”

“I had a list of about five things to talk about with the doctor. Down the bottom of the list was the itchiness of my vulva. It was red with a white scaly boundary, like eczema,” Bronwen said. “I was embarrassed to bring it up. The doctor suggested a steroid cream. Two weeks later, the itch and redness were still there, so she prescribed an even stronger cream and casually said, ‘I might as well take a biopsy, just to be sure.’”

“I remember getting the phone call to come back in to see the doctor. In her office, the doctor said, ‘You have Paget’s Disease of the Vulva. It’s a rare type of cancer, and it’s a new one for me, so I can’t give you any advice or answer any questions. You’ll need to go to a specialist.’ I was in shock. The GP gave me Professor Obermair’s name and also sent my information to the public hospital. As I was leaving, I said, ‘Should I check Dr Google?’ and she almost shouted, ‘No, do not! Get your information from the specialist you go to.’ Of course, as soon as I got in the car, I Googled it and kept reading until I came to the heading mortality rate. That stopped me in my tracks, and I took my doctor’s advice and turned the phone off.”

By the time Bronwen received a letter from the public hospital, she had already lined up an appointment with Professor Obermair. “After that first appointment, things moved fast,” Bronwen said. “The cancer is a slow-growing type, and it doesn’t respond to chemotherapy or radiation, so you have to get it cut out each time it returns. My first operation was in October 2017, the second in March 2018 and the third in November 2018.” During her treatment for gynaecological cancer, Bronwen also had an extremely painful benign tumour removed from her ankle.

Since then, Bronwen has had three check-ups that have been clear. Given the cancer type, she will continue with these check-ups for life. “My cancer journey has been bitter-sweet. Bitter that it’s with me for life, and every time I get itchy down there, I panic and know that I have to remain vigilant and see my doctor if it persists. On the other hand, I have found a brilliant doctor, and I’m so grateful for the protective and loving support that I’ve received from my family and friends.”

In 2018, Bronwen went to the QCGC Research Symposium in Brisbane with a dear friend. Sitting in the audience listening to information about the Cherish Challenge to Everest Base Camp, Bronwen was inspired. “I just said ‘yes’, and it was the clearest decision that I’ve ever made. I wasn’t sure how I was going to fundraise enough to go, but I was going. Thankfully, a small group of friends organised a series of events, and we raised over $11,000 for gynaecological cancer research. The trek itself was life-changing. Apart from the birth of my son, it was the ‘fullest’ time of my life – uplifting and transformative – physically, mentally, emotionally and spiritually.”

“My journey with cancer has taught me some valuable life lessons,” Bronwen said. “The first is that it’s never ‘just an itch’ down there, so don’t delay getting it checked. The second is that doctors and medical researchers are my new heroes. And the third lesson is to say, ‘yes’ to life’s adventures when they call your name. You won’t regret it.” 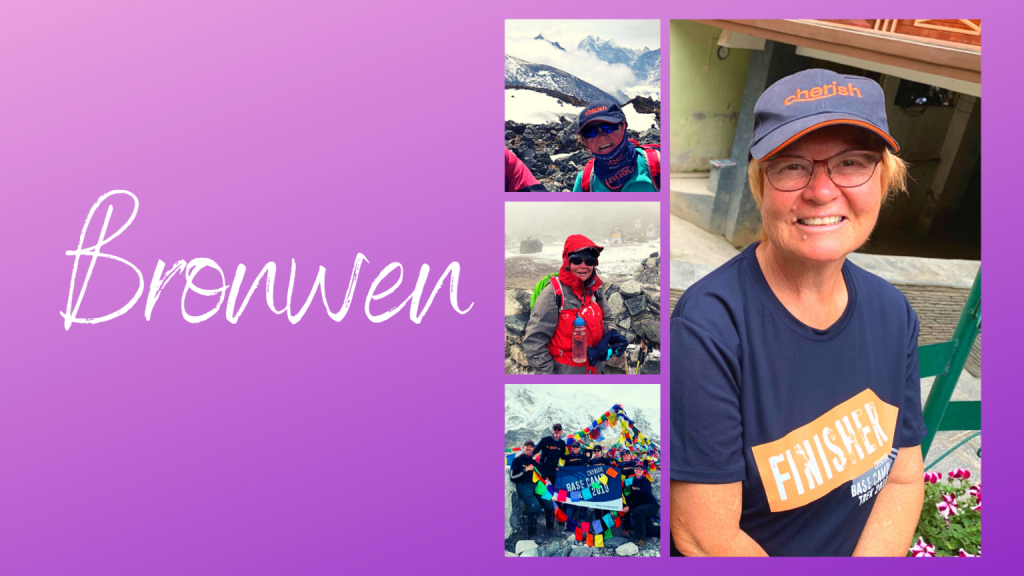