Nikita was finishing school and looking forward to Christmas when she was diagnosed with ovarian cancer. It turned her world upside down. Nikita had thought her expanding tummy was weight gain and exercised more to try and get rid of it.

Then, realising it was something more serious, she finally asked her mother to take her to the doctor. To Nikita’s shock, the GP thought she was pregnant! Instead, an ultrasound revealed a large mass growing near her uterus. After more tests, the doctors confirmed she had ovarian cancer.

So, instead of partying when school finished, Nikita started treatment. After surgery to remove the massive tumour, Nikita also had chemotherapy. She became vigilant about her health.

These days, Nikita is a biomedical engineer, and she’s doing well. She says: “Please fundraise so vital research can continue. I wouldn’t be here without it.” 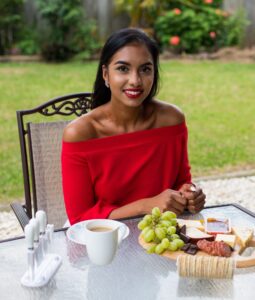