Paula Hatchman was getting ready to walk the Larapinta Trail with Cherish when her cancer re-occurred. Determined to focus on getting better, Paula chose not to register. Now that she’s had the time and treatments to optimise her health, she wishes she could squeeze it in. Instead, she’s getting behind the fundraising trek by sharing her story and encouraging others to do the same.

“If I could change anything, it would be to find the optimal early diagnosis test for ovarian cancer,” Paula said. “There are still too many women diagnosed with Stage 3 cancer like me. It would also be wonderful to have further scientific research resulting in enhanced immunology treatments so that women with this unrelenting disease may remain in remission longer. Regrettably, we can’t magic these things up. We need research.”

In 2015, Paula was fit, health-conscious and working as an IVF nurse. “When I look back to that time, there were some warning signs. I was urinating more than usual at night-time. I had mild back pain and some occasional bloating, and intercourse had become uncomfortable. However, I had gone through menopause and blamed these irregularities on getting older. I didn’t take enough notice. After a number of visits to my GP and others, it was at my insistence that a well-skilled radiographer performed a pelvic ultrasound that identified something wasn’t right.”

Paula was diagnosed with ovarian cancer two days before her daughter’s wedding. Five days after the event, Professor Andreas Obermair operated. Afterwards, Paula had 18 weeks of chemotherapy. After her first all clear in September 2015, Paula continued with three-monthly and then six-monthly check-ups.

In 2019, Paula joined the first Cherish Challenge to trek to Everest Base Camp. “I’m so glad that I joined the trek. It was an incredible experience.”

Later that year, Paula noticed her tumour markers rising slightly. She also felt mild discomfort in her chest at night. Apart from that intermittent discomfort, she felt well and lived a healthy life. In December 2019, a PET scan revealed four small cancer spots in her chest. “It was difficult to deal with as my five years post my original diagnosis was looming, and I was feeling very optimistic that I had beaten the disease,” Paula said. “I picked myself up, dusted off and thought, ‘right, I can beat this again.’ I went back to chemo, and a further PET scan post-chemotherapy revealed one small residual spot remained. I researched radiation treatment. After following up with a radiation oncologist and on her encouragement, I proceeded with treatment to eradicate, hopefully, the residual. I’m currently waiting on the results of my latest PET scan.”

“I try not to think about cancer, and, when I do, I see it more as a chronic disease and one that’s not going to cause my demise anytime soon. I’m here for the long haul, and I listen to my body carefully now,” Paula said. “It’s been a challenging six years with some very low lows. However, there are many more highs, and it’s changed my life profoundly. My faith is deeper, and my friendships are stronger. I have close cancer friends who are dear friends because they understand. I have a beautiful family, three gorgeous daughters, four grandchildren, and my sweetheart husband, who I have been married to for 41 years. Life’s pretty good.”

“I’m grateful to doctors like Andreas, who are also researchers and who do not leave a stone unturned when it comes to improving the treatment options for women with gynaecological cancer. Working in the medical sector, I’ve seen many wonderful doctors, but I’ve also seen many who are just doctors. Andreas is driven to make women’s lives better.” 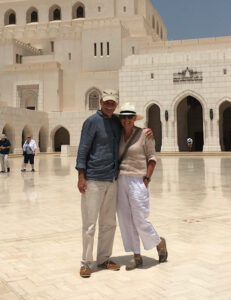